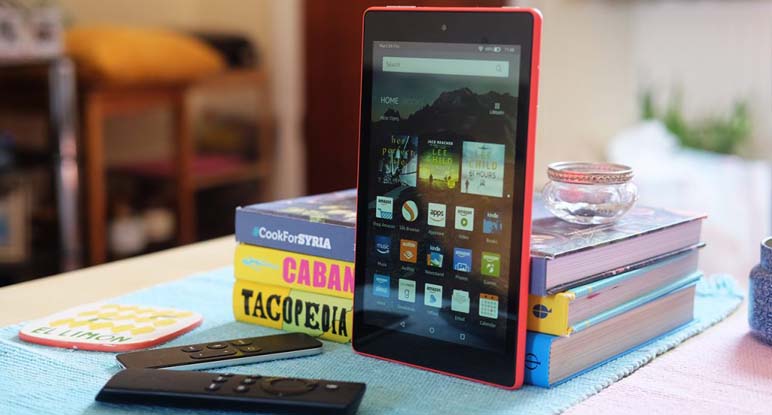 The special feature of both devices: Together with voice assistant Alexa, the trio unites to form an intelligent hands-free smart display. Is the stepbrother of the Echo Show family good as an alternative to an Echo Show speaker? Yes, albeit with certain limitations, but they are likely to be bearable for most users.

After the intelligent loudspeakers, more and more smart displays are finding their way into the smart home. The networked speakers with the integrated display can also provide visual information, for example cooking recipes or song lyrics, in comparison to their acoustic relatives.

From now on, even smart home users and Alexa friends with smaller budgets do not have to do without a stylish Amazon Smart Display. The e-commerce retailer now offers to charge dock and hands-free Alexa functionality with the Amazon Fire HD 8 patchwork family and associated show mode a low-priced entry into the Echo Show world of experience at a low price.

Get it from Apple

For the layman, it is difficult to differentiate at first glance, what the individual components are needed for and what functions they are responsible for in the interaction. Therefore, before the test results the responsibilities of Amazon Fire HD 8, Amazon Fire HD 8 show mode loading dock and hands-free Alexa simply explained.

Of course, users can surf the Internet limitlessly with the Fire HD 8 Tablet. Amazon provides its own web browser, Silk for this purpose. While testing the device, the browser worked perfectly and also played YouTube videos easily. Prerequisite for use is an Amazon account for device registration. Amazon Prime is not a requirement for use, but the Fire HD 8 Tablet only makes fun together with Amazon Prime.

Amazon's language assistant Alexa is one of the most popular language assistants. Users can ask Alexa questions, operate smart home devices such as radio-controlled sockets or thermostats, control lighting systems such as Philips Hue by voice command or activate thousands of Alexa skills that add new features to the voice assistant's functions. Hands-free means users do not have to activate an Alexa app first. The Amazon Fire HD 8 Tablet reacts with Alexa hands-free natively on voice commands.

Requirements for a successful installation

You need an existing Amazon account and a working WLAN. The installation of the individual components was completed in the test after four simple steps:

In the test, the installation of Fire HD 8 and Show mode loading dock ran smoothly.

Amazon Fire HD 8 Tablet with Alexa and Echo Dot - how good is the speech recognition quality?

When an Amazon Echo Dot and the Amazon Fire HD 8 Tablet and Show Mode dock was in the room at the same time, Alexa always responded to the device closest to the speaker. Even with the TV or radio on as background noise, Alexa had no problems understanding a voice command.

What does the show mode do?

Simplicity is trumped in Amazon's Echo Show models. The control is mainly via the language or display functions, which the user selects via touch display. This principle takes advantage of the Amazon Fire HD 8 Tablet in the so-called show mode. Activate and deactivate this can be easily in the settings. If a user chooses Show Mode, the Fire HD 8 Tablet app view and a drop-down menu will disappear, and the full-screen interface of an Amazon Echo Show will be displayed. For example, the device displays the headline feature "Trending Stories". With the voice command "Alexa, tell me more" the user can then ask Alexa to tell more information about the displayed topic.

In addition to trending stories, the display also shows tips and tricks on Alexa and the associated voice commands in show mode, which makes sure that you get to know the voice assistant much better than you would with a normal echo speaker. Show Mode can also be used with the Fire HD 8 Tablet without the Show Mode Loading Dock.

So, if you're already an Amazon Prime customer and you like shopping on Amazon's e-commerce platform, you can look forward to the wealth of content it can get from the Amazon Fire HD 8 Tablet with Show Mode Loading Dock, which is under test easy to steer with Alexa.

However, the language assistant needs a certain amount of study time - the more intense the usage, the better Alexa understands what the user wants from her. In the test, the language assistant played on the question of playing the Amazon drama series Lodge 49 a hotel promotional video of the video streaming service Vimeo. Only after several attempts, Alexa knew what was meant. After that, she did not have any problems to identify our wishes.

The music streaming service Spotify can be easily used via app and output via Bluetooth to an external speaker - Alexa supports on the Fire HD 8 with Show Mode Loading Dock but no voice control of the popular music streaming provider. Users must deactivate the show mode and operate Spotify via touch display. The situation is different with the free radio streaming service TuneIn, which was called in the test immediately with Alexa.

No problem had the Trio Amazon Fire HD 8 Tablet with Show mode charging dock and Alexa in the test with the voice control of connected smart home devices. Wi-Fi outlets connected to Alexa and Philips Hue lights could easily be controlled with the composite Smart Display.

Here, Alexa accesses information stored in the cloud about smart home devices. By means of the Bluetooth module integrated into the Amazon Fire HD 8 tablet, the audio output on external Bluetooth speakers is no problem either. However, it is not possible to integrate a Fire HD 8 Tablet with Show Mode Loading Dock into a Multi-room Audio environment.

However, we were stunned by the lack of the Firefox app, which is available for example on Fire TV products. Users need to use Amazon's own Silk browser on the Fire HD 8 Tablet. However, apps for Spotify, TuneIn as well as for the common media libraries are available as well as for common social media services Facebook, Twitter and Spotify or games. Overall, Amazon speaks of more than 500,000 apps that are available for Fire Tablets.

Interesting is the hardware features of the Amazon Fire HD 8 Tablet with Show Mode Loading Dock. In the test, the Fire Tablet responded relatively quickly to all requirements, without waiting or aborts occurred. Videos from Netflix and Amazon Prime Video were played perfectly. This is due to a quad-core processor, which ensures a smooth playback. In the test, a full charge cycle took 4.5 hours with the display off.

Example: Inside, Amazon has built stereo speakers with Dolby Audio. For the small size of the entertainment tablet, they make a surprisingly good sound. Videos from Amazon Prime Video can be downloaded to the Amazon Fire HD 8 Tablet, allowing you to enjoy TV shows and movies on the go when the device is offline. Via the micro SD slot, the internal memory can be extended up to 400 GB. The 8-inch display offers a maximum resolution of 1280 x 800 pixels. The brightness we found in the test as sufficient. At 8 inches, the Fire HD 8 tablet positions itself in the league of mini tablets, making it ideal for carrying in a backpack or handbag.

Can the combination of Amazon Fire HD 8 Tablet with Hands-Free Alexa and Show Mode Load Dock replace an Echo Show? We think so. For about $149.99, users get an almost complete echo show experience and mobile Amazon entertainment center. This makes the Internet giant smart displays acceptable.

Although premium features such as Multi-room are missing and there are no four far-field microphones installed as in the third-generation Echo Dot, these features are not necessarily the most important purchase criteria for many users. In the test, the offered functions were completely sufficient.

Amazon is positioning itself as the third force alongside Android and iOS with its own Fire OS, focusing on its strengths: entertainment in the areas of video streaming, e-books and audio-books, and music streaming. Those who like to try many apps and use Google's productivity tools will feel more comfortable on an Android tablet. If you buy your content on iTunes and feel at home in the iCloud, an iPad is certainly the first choice. However, those who shop more often at Amazon or Amazon Prime customer may look forward to the Amazon content conveniently on the Amazon Fire HD 8 Tablet can play.