Review Of The Best Simulators For Breaststroke Swimming

Disclosure: Wadav is reader-supported. We may collect a share of sales or other compensation from the links on this page.
By Evan Cooper 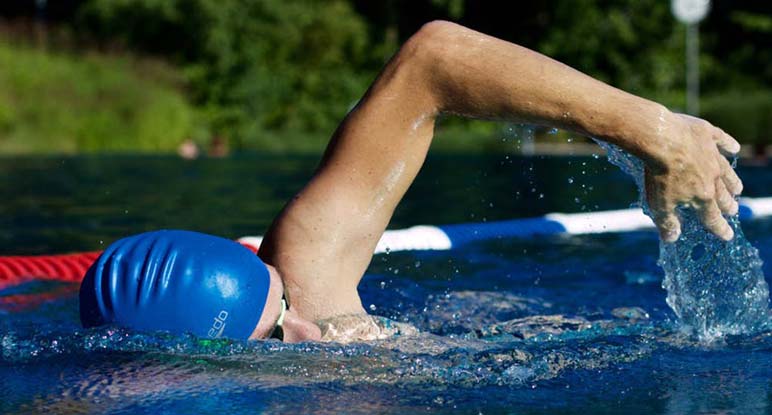 "Where is the former freedom of movement?" - Probably, you will ask yourself this question at the first direct acquaintance with one of the novelties of the company Finis - simulator for swimming breaststroke Kick Pro. Yes, it's unusual to swim in it at first, but it's effective: with Kick Pro, it is quite possible to make one more step on the way to the title of the king (or queen) of the brass. Let's see how.

Two neoprene (read: hypoallergenic and soft) cuffs with velcro fasteners, connected together by a strap fastening - in appearance Kick Pro is quite simple. However, he does not have the functionality: he can use the breaststroke, the crochet, and the dolphin to train the technique of working the legs in it, but first things first.

SWIMMING WITH A BRASS:

Actually, the breaststroke is the style for which Finis Kick Pro was developed in the first place. For swimming, this way cuffs are fixed just above the knees, which are not difficult, as the circumference of these "sleeves" for the legs is easily adjustable. Velcro fasteners allow you to securely and at the same time comfortably fix the cuffs in one place: so that during our test swimmer the simulator never went anywhere and did not fly off. In this case, Kick Pro does not rub - after training, we did not find any characteristic traces on the legs.

The first hundred meters under the tenacious control of Finis Kick Pro are felt as something unusual and cause a single desire - to get rid of the "shackles" as soon as possible. However, the amplitude of the movements of the legs is limited in such a way that, willy-nilly, the press turns out to be narrower and more focused, sharp and compact. This significantly increases the load on the muscles of the inner side of the thigh. Additional resistance, created by elastic cuffs, is felt already from the first tremors: the effort to apply is much more. But at the thought that the muscles after this training will become even stronger, there is even some excitement and the desire not to slow down.

Important note: the work of the hull also becomes more intense and technical. It is curious that even on the first lesson, having freed yourself from the "bonds" of this simulator, you continue to swim as if you did not take it off - the muscle memory is triggered. In short, Kick Pro is an accessory "two-in-one": it not only forms the technique of a quick and narrow push with the feet, more ergonomic movements of the body but also develop the strength of the corresponding muscles.

Swimming with a breaststroke with Finis Kick Pro is kind of like training with the same style, but with a pad between the legs. However, the development of Finis makes it possible to regulate the distance between the legs - that is, decide for yourself how much to complicate your life in the context of a single workout :) For example, for swimming in your hands, this simulator can be fixed on the ankles, it will always stay in its place and will not allow it to ease its task. As a result, training will become much more effective, because the body and hands will work more intensively.

If it seems that you have already sailed a breaststroke today, and it's time to switch to working off the technique of other styles, here again, Kick Pro will not lie on the rim without any work. The fact is that the cuffs can be fixed in the area of the ankles (as we already noted above), and just below the knee. This position when swimming with a crawl or on the back causes with a smaller amplitude, but with more power and frequency to work with the feet - that is, more productive. In the case of the dolphin, Kick Pro fixes the correct position of the legs. In addition, due to the emerging artificial resistance develops strength and endurance.

To train with Finis Kick Pro alone is good, and in the fins of Positive Drive Fins from the same Finis, it's even better. These fins themselves are unusual and immediately attract attention because they are created specifically for swimming breaststroke. A small thickened blade of rounded shape is located around the entire front area of the foot, while as such, the heel of these fins is missing: the leg behind is reliably supported by a fairly wide loop. What is rather rare in fins: this model does not rub and at the same time firmly holds on to the foot.

The first "meeting" with Positive Drive Fins in the pool (or something more extensive and unchlorinated - as it happens) will definitely bring you new impressions: when swimming with a breaststroke these "flippers" give some other feeling of water. They not only force the correct position of the foot (almost perpendicular to the water surface) during shocks, but also contribute to their more dynamic implementation. In these flippers, the feet retain the necessary flexibility and "feel" quite comfortable. By the way, already at the first training session, we noticed a more significant load on the muscles of the hips (especially - on the leads), which give Positive Drive Fins. Joy from the increased speed is attached.

Positive Drive Fins - a find for the brassiest. But also for fans of the "complex" they work perfectly on all four styles. The main thing is that with this accessory, swimmers with a style of brass cannot feel deprived and train in flippers at least every day. So - enjoy the speed and constant overcoming of even greater resistance to water.

In fact, Finis Kick Pro and Positive Drive Fins are not the only accessories that it would be nice to have every brassiest. Another interesting model is the development of the American company StretchCordz, a simulator for breaststroke breasts Knee Elastic. Its design is somewhat reminiscent of the already reviewed Kick Pro: it also fastens just above the knees, but it is an elastic band in the form of a figure-eight with holes for the legs. Knee Elastic stretches almost in all directions, you will not find any hard connecting strap like that of Kick Pro. Adjust the distance between the legs here will not work, but it's not a problem - Knee Elastic due to its comprehensive elasticity, in any case, makes it necessary to overcome a very tangible resistance. And it seems that with this simulator a more significant load falls on the muscles of the external side of the thigh. In addition, this device fixes the correct position of the knees when pushing with the feet - for the correct brass technique. As experts of Pro-swim note,

So is it possible to put the "equals" sign between StrechCordz Knee Elastic and Finis Kick Pro? This would be fundamentally wrong because the differences in design here are due to the discrepancy in the functions of these simulators. If Kick Pro trains a narrow and powerful push, more involves the body, and then Knee Elastic more "gently" controls the position of the knees, while also loading the muscles of the outer side of the thighs. Unlike the production model of StrechCordz, Kick Pro does not give such a swing in the movements with his legs - in it the knees are rigidly fixed and the main role is transferred to the shins, called to make purposeful sharp jerks. Kick Pro along with this more versatile - suitable for swimming is not just a breaststroke.

Pro-swim specialists conclude: both StrechCordz Knee Elastic and Finis Kick Pro are useful simulators for brassiest, each with its own "chips". Both are quite reasonable to use in the training process, improving their own technique, focusing on its various elements. And for additional work on the strength of the legs and speed swimming is not superfluous to use the fins Positive Drive Fins.

Training on the water is always pleasant to dilute by working on the land. Moreover, today the sports industry offers swimmers all kinds of simulators-expander for working out different groups of muscles outside the water. These include the StrechCordz Breaststroke machine, which allows you to simulate the "breast" strokes with more resistance than in the pool (which means that the athlete's strengths from such exercises will improve faster).

Breaststroke Machine consists of two blades, to each of which two flexible bundles of different length (68 cm and 1 meter) are fastened with a loop at the end. With the help of these loops, the simulator is easily fixed on a Swedish wall or other similar objects. Each pair of bundles, as it were, forms two triangles: short ones intersect each other, and long ones are located at the edges. It remains only to put the blades on their hands and move to the necessary distance - so that there is sufficient tension. Already the first few strokes involve active work not only in the muscles of the hands but also in the back and chest. The load level can be selected individually: Breaststroke Machine from StrechCordz is available in five varieties (depending on the resistance level). So both beginners and advanced brassiest with this "machine" will not have to work half-heartedly.

"The Kick Pro simulator impressed me: it makes it possible to swim quickly while making" narrow "shocks with your feet. He does not bother me at all "- so the American swimmer, Scott Welz, who represented the United States at the 2012 Olympics, speaks about Kick Pro. Welz trains with a full "ammunition": both with the simulator, and in the fins of Positive Drive Fins. It seems worth following his example! And it's good to take StrechCordz Knee Elastic with you to the pool, and in the hall (and not only) once again to work on the power of the strokes - with the help of Breaststroke