Best choice of a sling for the newborn 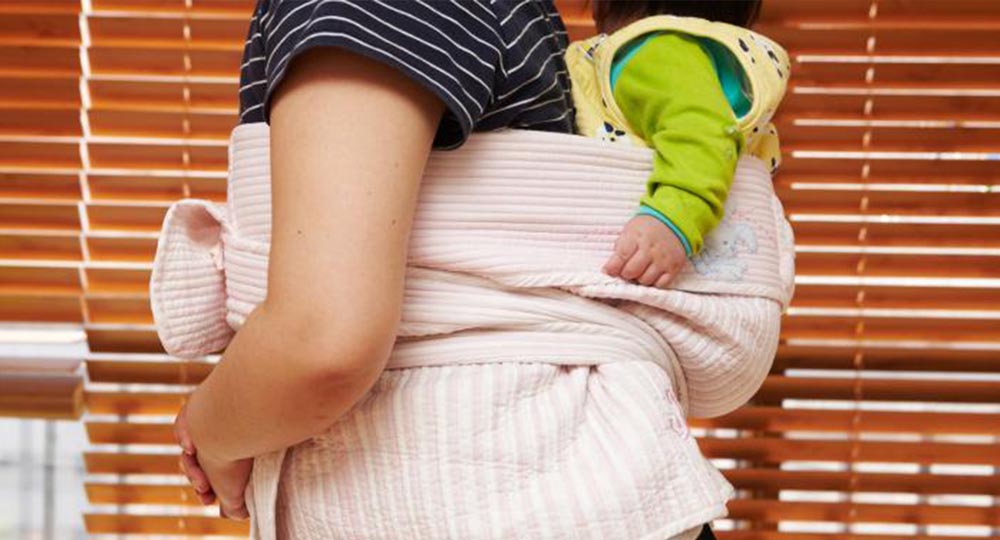 The first weeks after the birth of a child is always warmed by some special warmth, tenderness for the tiny creature that lies in your hands. But, sometimes my mother wants to eat. Go to a party or a shop. And in the end how much can you wind circles around the house?

As many mothers say, "sling gives mom wings" And this is so - you become more mobile, you can go to the store, guests, cook dinner and do other things.

A young child needs close physical contact with his mother, a sense of her warmth and smell, so when he is with his mother, he feels more relaxed, relaxed, showing more interest in the world around him. On the hands of the mother, the child receives the basic sense of security, warmth, and trust that are so important for the formation of a healthy child's psyche. However, if mums need free hands (for example, cook dinner), then they need somehow to be released, for example, with a device for carrying a child.

Remember that a child is not a reduced copy of an adult. Therefore, in order to competently choose a sling for wearing a newborn, you need to know the characteristics of his physiology, characteristic precisely for the infant age and the first year of life.

.As we have already said, a child is not a reduced copy of an adult person, either from the point of view of his skeleton or from the point of view of his functioning. Ossification and complete spine formation end by at 25 years. Until the end of the second month of intrauterine life, the skeleton of the baby consists only of cartilage. As it grows, it will harden and turn into bone. By the end of pregnancy, some parts of the skeleton ossify (for example, the femur), and the second wave of ossification begins at the end of the long bones (the bones of the bones)

Our spine is not perfectly straight. If we look at the adult on the side, we will see four small bends that make the spine look like the Latin letter S. Thanks to these bends, we have the flexibility, and we can balance and absorb loads during walking, running and jumping.

However, these bends of the spine are not congenital. They are formed gradually as the child develops physically as a consequence of adaptation to gravity.

Stages of development of the spine:

Â·       The spine of the newborn baby is bent and resembles a light arc or letter "C". He does not yet have bends and not enough strength to hold his head. When wearing a baby on hands this function is performed by his mother: she supports his back and head. If we want to carry the baby on any device, it should allow fixing the childâ€™s head on a level with the body or letting the mother support it with one hand.

Â·        Approximately from 6 weeks the baby begins to lift his head from the prone position and to 2.5-3 months can confidently hold it already in vertical positions. The cervical lordosis is formed.

Â·        Thoracic kyphosis is formed in a child by the age of six months when he begins to sit on his own. Lumbar lordosis is developed from the moment when the child begins to gradually get up.

Â·        The sacral kyphosis appears after the child begins to walk and forms up to 6-8 years.

The newborn does not straighten him, it can only be straightened out by force, for example, if swaddled by a "soldier". If the child is put on his back, he will reflexively pull his fists to his chest, and he sleeps with widely divergent legs in the "frog pose". The embryo posture is the most natural pose for babies, it calms and promotes adaptation to a new world for the baby.

The vertical and horizontal position of the baby "belly to stomach" in the position of the embryo is very comfortable for the baby. In this position, children better digest food. Thermoregulation is more effective because the stomach zone is closed. On our backs, the subcutaneous fat layer is thicker, and the thermoregulatory cells are stronger.

When a child is taken in his arms, his legs remain instinctively bent and divorced. Together with the grasping reflex, this posture helps the child to cling to his mother. Thus, we provide him with a natural posture that his body instinctively takes in order to provide comfort, warmth, and security.

When wearing a newborn baby, it is important to provide support for the back and cervical spine. When choosing a device for carrying a child during this period, pay attention to the fact that:

Â·        The possibility of fixing the cervical department. This will prevent the head from tipping over.

Â·        The possibility of uniform support of the entire back of the baby. This means that any device with stiff backs or without the possibility of a point adjustment of the fabric tension is not suitable for wearing a newborn and a baby.

Wearing a baby with legs inside the sling/carrying.

This way of wearing babies can often be found in old instructions and articles on websites. However, it can be recommended only in exceptional cases (very strong hypertonicity, prematurity). At the healthy full-term kid the legs from knees should be outside and be able to move freely.

In real sling the vertical position of the baby looks like this:

Â·        The head supporting tissue or roller runs under the back of the head or on the head at the ear level.

Â·        Back slightly rounded and evenly pulled by cloth

Â·        As it were "twisted", tucked to my mother (my knees rest against my mother in the stomach)

Â·        The legs are symmetrical, divorced from a comfortable angle (for newborns it is very small), from the knees are free (M-position).


Wearing a baby in the "cradle" position has a number of features:

Firstly, it does not involve the placement of the hip joint in the M-position, and therefore both in wearing on hands and in sling horizontal wearing is important to alternate with the vertical.

Secondly, the child is located in the sling a little differently. The sling should provide support:

The child is located diagonally. The lowest point of the diagonal is the child's butt, the uppermost one is the head, and the knees are higher than the priests. The child is half-turned to Mom. At the height, comfortable mum, half-awake to my mother.

Thirdly, and very important! Mom should always see the face of the child. It should not be under the breast, under the arm, and be covered with a cloth. The maximum fixation is along the line of the Templar and the eyelet.

During feeding, it is necessary to support the neck (!) Of the baby on the elbow in order to be able to monitor the child's condition and correct application. The chin should not be pressed to the chest, between them should fit freely one or two fingers.

In real sling the horizontal position of the baby looks like this:

Here we are with you and figured out the main features of the baby's physiology of the first year of life. It remains to choose sling. As you have probably already realized, not all slings will be equally useful for a newborn and baby - some will fit perfectly, and some do not. Let's understand!